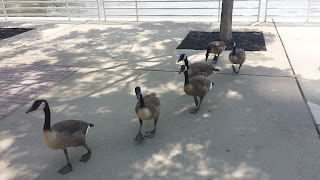 In the past few years there's been a growing number of increasingly strident petitions in our local community about the "infestation" of Canadian Geese. The complaint - they're everywhere, they make a mess of our nice clean paved sidewalks with their droppings, they pose a danger to kids, pets etc. etc.Some have even called Animal Control to come take the birds away. To no avail. The birds are here more frequently, stay longer and are growing in numbers.

What got me curious, was the recency of this phenomenon. The area around here has been inhabited by species homo sapiens for many decades, and I myself dont remember this being an issue a few years ago, so why this sudden outcry?

So of course I started researching it. And figured out that it's happening because of marked changes in the geese's behavior. And what caused that you may ask? Wait ...take a wild guess... surprise, surprise, WE DID!

Canadian Geese as the name implies were native to Canada and the extreme north eastern territories of the US. Wild geese would spend their summers in their native habitat, where they bred and lived until their goslings were able to fly. They spent those months close to natural water bodies that they could escape to, if threatened by predators like foxes, bears, wolves etc. It was also when these herbivores found abundant food supplies. Come the fall, following their instinct they would fly south to avoid winter food shortages.

Now all of that has changed -
1. Global warming has changed the patterns of freezing winters in the north. Since many areas have become warmer, in some cases by as much as 5 degrees, Geese don't need to fly as far south as they used to.

2. As more of the wilderness was lost to development, most of their natural predators have been killed or restricted to very isolated pockets. Since there is less fear from them, and there are more artificial water bodies everywhere (should they need to escape), they can land and live anywhere their heart desires.

3. The growth of suburban areas with parks, golf courses and cultivated vegetation has created a year round source of food, again making migration unnecessary.

Most importantly, many of the geese we see today, may not be wild Canadian geese at all. In the mid part of the 20th century, this species was almost extinct. Overhunted by humans for meat and their soft down, only a small group of the original breed struggled to survive. So the government swooped in, moved them into protected areas and started breeding them in captivity to bring their numbers back up.

Even though the goal was to reintroduce them to the wild, over the course of a few generations, all their natural instincts  - to migrate north or south, where their original breeding grounds were, etc. - started fading slowly. The very hospitable conditions created by human settlements, no predators (even human ones, since hunting is restricted), plentiful food and water set the seal on their memory loss.

What we are left with now is a "human aware", non indigenous bird that continues to breed at an accelerated pace and is changing the environment wherever it goes. And this is just one bird species. There are hundreds of other species of living organisms - plant, animal, even single cell,  that are also metamorphosing as they adapt to the changing conditions caused by human development.

The question is, what will the future of this planet be when all these changes accelerate and come together? A new state of balance that is yet to be established or an imbalance that will lead to destruction?