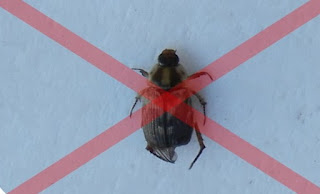 A sudden screech..."Eeeek!", followed by a vigorous flailing of arms or stomping of feet... now that would be the normal reaction. Instead this morning I gently picked up in my hands and saved two "ugly" brown bugs while swimming laps in our pool. I see them often, struggling to get out of the water before they drown. I know many who see me doing it probably think I'm crazy. My response to anyone who would ask; not that anyone does, they just stare at me weirdly and look away, probably wondering when the men in the white coats are coming to take me away to a padded cell; is because they matter, and because we owe it to them.

Here's another similar story I saw on the news today, yesterday, almost everyday. A local reporter interviewing a panicked family as they recount the fear of what they experienced. A bear/coyote/deer broke into their backyard/house/garbage, scaring the kids and causing general panic until help arrived in the form of uniforms with tranquilizer guns/traps etc.The news segment commentary usually includes a reference to the growing number of animal incursions into human habitats.

Now you may ask, what could possibly be similar about these two stories, one about brown creepy crawlies drowning, and another about large "scary" forest mammals intruding into someones backyard.I say everything...! These stories and many others I hear and see every day astound me in their illogicality and factual inaccuracy.

Because the real story as I see it, is as follows -" humans raze local forest, grassland, or undergrowth; displacing or destroying millions of living creatures in the process and then complain when those same creatures try to return to their original homes/hunting grounds/food stores".


Animals, insects, all creatures follow a natural and habitual path everyday. When they wake up, they usually go to the same places seeking food, water, mates or just a cool place to nap. When we destroy that place that is so familiar to them, they can't just say 'oh well, lets make a detour' and find another spot. They are driven by instinct to go back there, only to face unknown dangers like cars, weapons and physical violence sometimes even leading to death.So those brown bugs I save every day, that black bear rifling through your garbage, the geese nesting in the local park, they are all following their instinct to return to what was once a familiar part of their natural habitat, only to fall into man made swimming pools, stumble confusedly into unfamiliar human structures, get yelled at, attacked, and more.

Imagine what your reaction would be if suddenly one road on your regular route to work was shut down... denial, anger, maybe even a desperate hope that if you keep going it won't be true. Not so fun hunh? Now think about that being a frequent and permanent change to many roads on your way and you having to figure out a new path every time.


The fact is, that these creatures that we find so disruptive are the original inhabitants of this planet, many of them have been around millions of years. We as humans are the newbie squatters, usurpers ... whatever you may call it. While clearly we need the space to support the growing population, maybe we can treat that space with respect, understanding, and concern for the creatures who have always ,and still do live there. And next time one of them wanders into our path, maybe we acknowledge their right to be there, help them find a new path and thank them for giving up their home for us.

By Pallavi Sharma April 27, 2015
Wildlife hunting in Africa is suddenly big news. Thanks to a tweet by Ricky Gervais (albeit almost 5 years late) about Rebecca Francis and her killing of a giraffe in 2010, and followed closely by news stories of the US's approval of a black rhino hunting license won in a Dallas auction last year, there's now a spotlight on the issue of trophy hunting. While this controversial subject and its often misleading claims to helping conservation efforts is getting its day in the sun, there is another more deadly practice hiding and growing in the shadows in Africa - Canned Lion Hunting. Peter Barkham of the Guardian likens canned lion hunting to "shooting fish in a barrel". Adult lions raised in captivity and often drugged,  are released into an enclosed area, with no room to run. Hunters, on the back of pick up trucks are able to pick them off with almost guaranteed success. I say almost, because even with all the odds stacked in favor of the hunter, amateurs ofte
1 comment
Read more