If there was ever any question about why saving the Rhinos was so important, the story out on major news channels recently, should eliminate all doubt.

There is only one... count that... just one male northern white rhino left in the entire world. In fact there are only 5 of the species left in total, two females in zoos in the US and Czech Republic and 2 other females who live with Sudan, the single bull at a conservancy in Kenya.

The situation is so dire, that Sudan, the bull, and his two female comoanions are under 24 hour armed guard and wear monitors to prevent poachers from getting to them. Demand for rhino horn, which is believed to have medicinal properties, continues to grow, and is estimated by some experts to be worth more than drugs.

In addition to protecting him for as long as needed, frantic efforts are underway to help the two females breed. With age and urgency be in a factor, alternative options like in vitro fertilization and surrogacy with a different white rhino species are also being concerned.

A few people asked me after my post two weeks ago, why I was focused on rhino poaching and conservation. While I am passionate about the conservation of every species big or small, this news more than ever, makes the emphasis on the rhino necessary. If we all don't wake up and collectively care enough to take action soon, this very visible species will be extinct in the next few decades. If we don't start taking a stand now,  what happens to all the other not so prominent or well known animal species then? 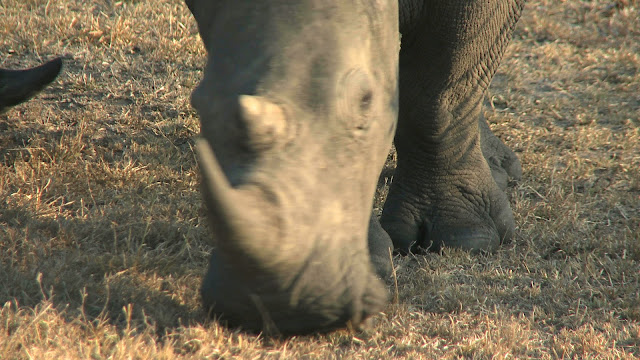 By Pallavi Sharma April 27, 2015
Wildlife hunting in Africa is suddenly big news. Thanks to a tweet by Ricky Gervais (albeit almost 5 years late) about Rebecca Francis and her killing of a giraffe in 2010, and followed closely by news stories of the US's approval of a black rhino hunting license won in a Dallas auction last year, there's now a spotlight on the issue of trophy hunting. While this controversial subject and its often misleading claims to helping conservation efforts is getting its day in the sun, there is another more deadly practice hiding and growing in the shadows in Africa - Canned Lion Hunting. Peter Barkham of the Guardian likens canned lion hunting to "shooting fish in a barrel". Adult lions raised in captivity and often drugged,  are released into an enclosed area, with no room to run. Hunters, on the back of pick up trucks are able to pick them off with almost guaranteed success. I say almost, because even with all the odds stacked in favor of the hunter, amateurs ofte
1 comment
Read more